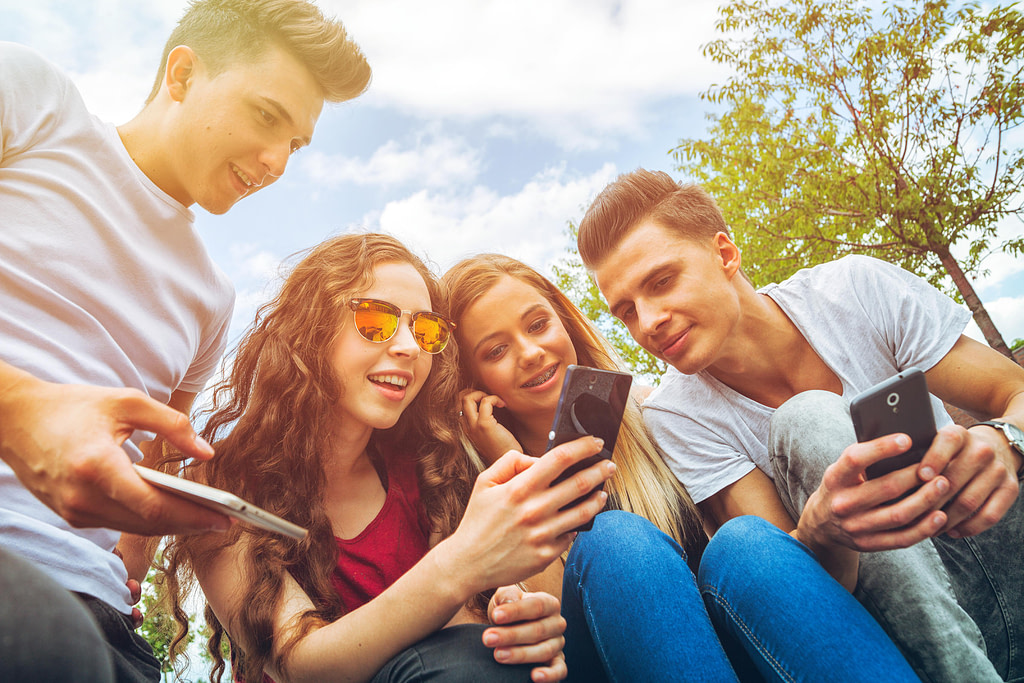 Young adults ages 18-25 have grown up with the internet being an integral part of day-to-day life. With Internet access being so readily available at home and on the go, it’s understandable that it would impact how young adults interact with products and with each other.

With that in mind, we’re going to breakdown the behaviours and preferences of young millennials and the emerging “generation z” consumer, in an effort to provide answers to the top 4 questions you should ask when advertising to younger audiences.

1. What are they using their mobile devices for?

In a survey by Ipsos, it was revealed that on average, teens spend around 3 hours a day watching online video streaming content. Apps like YouTube, Twitch, and Netflix have become increasingly popular with young adults and Gen Z.

As shown above, messaging apps are also incredibly popular with teens. Apps like WhatsApp and KiK allow them to communicate with each other, sharing videos and pictures with ease.

Facebook, Twitter, and Instagram are popular social platforms for all age groups. Snapchat, however, is seen as the platform of the youth, with a recent study by Omnicore revealing that 71% of Snapchat’s users were under the age of 34 and 45% were aged between 18-24.

Interestingly enough, a study by Euclid Analytics, found that 44% of Gen Z shoppers used Snapchat while in-store shopping. In the same report, it was revealed that among Gen Z users, Instagram was king for discovering new products.

In keeping with shopping and brands, shoppers aged 18-34 have shown that they are using their mobile devices to search for coupons and promo codes before making a purchase.

In a recent report on Forbes.com, it was noted that a large number of young adults use social media to stay up-to-date with current sales and promotions of their favourite brands. Following brand accounts for promo codes and coupons, is a popular aspect of their customer journey. Forbes also noted that two-thirds of these young adults would switch brands if they were offered a discount of 30% or more.

The same report found that they are just as interested (if not more) in the opinions of social stars (influencers) when compared to established mainstream celebrities. Younger audiences are open to the idea of sponsored content on YouTube and Social media as long as it is clearly disclosed upfront.

Mainstream celebrities still have an influence among this demographic though. Musicians, movie stars and reality stars are still consistently trending on social media and videos/blogs on celebrity gossip are key topics of interest among young adults.

In the Ipsos survey mentioned above, 42% of the teens said that they spend 3+hrs a day playing games on their mobile devices. Casual games like endless runners, match 3 games, and card games are the most popular mobile games and are often played on commutes or in short bursts throughout the day. Creation games like Minecraft are popular across all devices (Console, PC, Mobile) and more “hardcore” gaming experiences like first person shooters and sports titles remain popular on consoles.

The image below shows key demographic statistics for the most popular social media apps and websites. In each case, people aged 18-29 had the highest percentage of usage and in the majority of instances, females used the platforms more than men.

3. How do they discover news and information?

As shown in the graph below, social media and YouTube are dominating how young adults and millennials are absorbing news and information.

Instead of sending emails or coping URLs, young audiences are tagging friends in social media posts to share news and information with each other. Using hashtags associated with an event or news piece, allows them to “join the conversation” and give their opinion.

4. How can you communicate with them?

The answer here is through social media and YouTube, both via your own branded channels and through influencers on the platform. Explore sponsored content and utilize the popularity of social media personalities to reach younger audiences.

Furthermore, incorporate younger people into your ad campaigns and use real testimonies to promote your brand. Make sure your shopping cart solution accepts as many payment options as possible. In a consumer trust survey by Olapic, it was noted that millennials and younger audiences prefer branding and advertising that highlights “real people” and 76% of them felt that content posted by other consumers was more honest than brand content.

Within the same survey, it was noted that 75% of the people preferred photos over text and 60% had used branded hashtags in their social media posts. So keep your ads simple and favour imagery over text. Incorporate hashtags into your campaign as a way to monitor the engagement and to provide opportunities to interact with your customers.

Alex Sysov is an academic thinker with rich analytical, creative and communicative skill-set. Experienced Digital Marketer and a business analysist with a demonstrated history of working in IT / Tech / Digital Marketing companies. Passionate about data management, tracking, analysis and problem-solving topics.

Disclaimer: This is a guest-post written by eCommerce experts to share their knowledge with the readers of the Simtech Development blog. The Simtech Development company bears no responsibility for the visual content (video and images) of the provided article. If you think this content violates a copyright or trademark, send us a letter to marketing@simtechdev.org. Our team will review your report and take any necessary action.